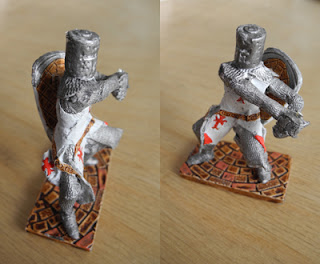 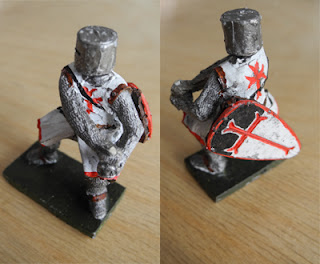 Here are some early figures I sculpted, molded, and cast last year.  They are both cast in low melt-point alloy.  One figure is a single cast, and the other figure has arms and shield cast separately and attached.  My major problem with making molds of my figures is venting them properly so there are no bubbles or trapped voids.  Both figures are chunky and awkward.  Other major problem I struggle with is the attachment of the separately cast arms.  I am working a new method of creating a socket for attaching separate pieces as well as new mold making techniques.  The thickness of shields is also a problem.  It is a challenge to get the alloy to fill all the spaces in the shield without leaving any voids.  I am also going to attempt to make the shield part of the arm cast for my next figure.  We'll see how that works out.  I hope to make improvements on these crude initial pieces.  I'm working on a series of three new templar knights and am looking forward to working out some of these issues and getting a better result.
Posted by Mr. Bigglesworth at 5:20 PM