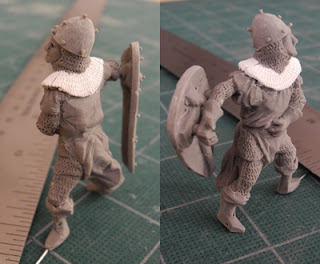 Here is another figure I'm working on this month and planning to cast at the same time as my kneeling knight.  I decided to simplify things with this figure and cast the figure as a whole, with only the shield and base as separately cast pieces.  This was a much simpler figure to do because I didn't have to deal with all the sockets involved with the first figure.  I also decided to sculpt most of the chain mail detail in clay rather than use the gesso detail.  This was also a quicker approach, although I did keep the gesso for the chain mail bib around the shoulders.  There is something weird happening with the stance of this figure, very apparent from a certain angle - I just won't show you that angle.
Posted by Mr. Bigglesworth at 8:47 AM